How to install the Windows Build Tools?

If your development platform is Windows, you need to install two additional command line programs, make and rm, required by the Eclipse external builder.

Unfortunately, most current toolchains do not provide these two programs in their windows distribution.

On macOS and GNU/Linux these programs are part of the standard distributions, either directly or in separate Developer packages, so the following steps do not apply.

One notable exception is the Mentor Sourcery CodeBench Lite toolchain for Windows, which provides two programs, cs-make and cs-rm (the cs- prefix comes from CodeSourcery, the former name of the company that distributed the toolchain).

Unfortunately it seems that the CodeSourcery setup is not complete, and the bin/sh is not present, so, make is using cmd.exe to run sub processes, which presents the old Windows 8191 characters command line limitation.

So, if you use the CodeBench Lite (not recommended anyway), although you already have these two programs in the toolchain path, if you want to use longer lines and a modern make, preferably install these tools and update the names from cs-make to make and from cs-rm to rm in the Toolchains configuration tab.

Otherwise, if you use other toolchains, like the recommended GNU Tools for ARM Embedded Processors, for your convenience we prepared a small package with the required build tools; download the most recent gnuarmeclipse-build-tools-win[32|64]-*.*-*-setup.exe file from the Github Releases page and proceed with the setup.

Run the setup with the default settings: 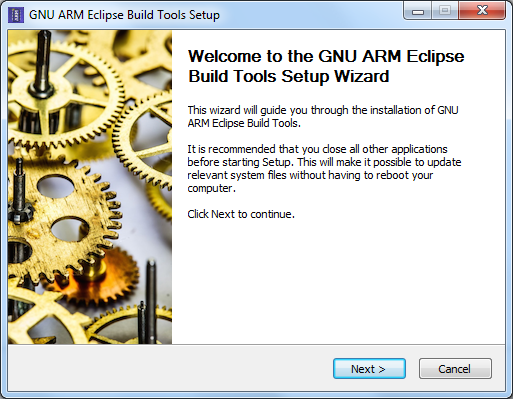 By default this will install the programs in the C:\Program Files\GNU ARM Eclipse\Build Tools folder: 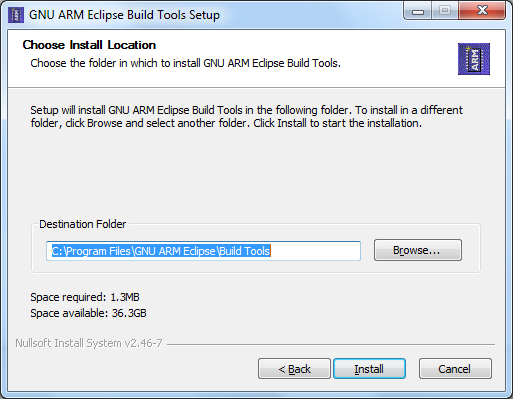 Check if the tool is functional; go to the folder where you installed the tools and run make --version.

DO NOT update the user or system path!

As recommended when installing the toolchain, it is recommended to keep this settings outside the user or system path. Microsoft did not provide these programs in their distribution, and it is better to keep it that way, when you need them just explicitly update the build path to use them.

If needed, you can completely remove the package from your system by running the provided uninstall (build-tools-uninstall.exe).

The package also contains an executable for the echo command. It is not mandatory for the build to succeed, but it is recommended to have it in the build path, to avoid an annoying CDT bug, that triggers an error during the first build of a new project, claiming that Program “gcc” not found in PATH.