How to install the GNU ARM Eclipse plug-ins?

If you know what this is all about, drag-and-drop the Install button available below to your running Eclipse workspace and follow the Eclipse Marketplace install/update steps.

If you want to do it manually, you only need the update site details:

It is recommended that you install the plug-ins after installing the toolchain, the build tools (on Windows), and the debugging binaries.

Since these are Eclipse plug-ins, they obviously require a functional Eclipse CDT, which requires Java.

Win XP - a word of caution

For the old-timers, a word of caution about Windows XP: recent Java distributions (from 7 up) are no longer certified for XP, so, even if they might seem to work, you are on thin ice. If possible, avoid using XP at all; otherwise use only the 32-bits version, with 32-bits Java and Eclipse.

The warning is even more important for Win XP 64, which, in certain configurations, has difficulties to start 32-bits applications (like the JLink GDB Server or OpenOCD). Although generally Win XP 64 is not recommended at all, if you really need to use it, preferably experiment with a 32-bits Java and a 32-bits Eclipse.

The recommended package is the latest version from the official Oracle Java SE page. The OpenJDK Java used in Ubuntu is also fine. The minimum is JDK 1.7, or even JRE 1.7 (the Java Runtime Environment), but, as said before, better use the latest JDK (currently 1.8). On macOS the last Apple Java implementation is 1.6, so it is required to use the Oracle version.

On some distributions, for example on Ubuntu 16.04 LTS, Java seems to be already installed in the standard distribution:

On other distributions, for example on Ubuntu 14.04 LTS, you can install the OpenJDK run-time and test if it was properly installed with the following commands:

If you are behind a firewall, older Java virtual machines fail to connect to SourceForge. Update your Java JDK to 8u101 or later and retry to install the plug-ins.

If you use the Oracle JDK, starting with mid January 2017, attempts to install from SourceForge might fail with handshake_error. Install the Java Cryptography Extension (JCE) Unlimited Strength Jurisdiction Policy Files and the installer should be able to reach the update site.

The oldest Eclipse supported by the plug-ins is Eclipse 4.4 Luna SR2 (CDT 8.6), and the recommended version is 4.5 Mars SR2. Do not try to install them on Kepler, Juno, Indigo, or older versions, since the install will fail.

Neon initially had several problems, but starting with Neon.3 it finally seems fully functional. Avoid previous Neon versions, since they do not work properly. If you want to use GCC 6.x, you need Neon.3 (the compiler itself has no problems working with Mar, but GDB 7.12 is not supported on versions before Neon.3).

Go to the Eclipse packages and get the Eclipse IDE for C/C++ Developers archive appropriate for your platform, preferably the 64-bits version.

Links to older versions are available in the More Downloads section, at the bottom. 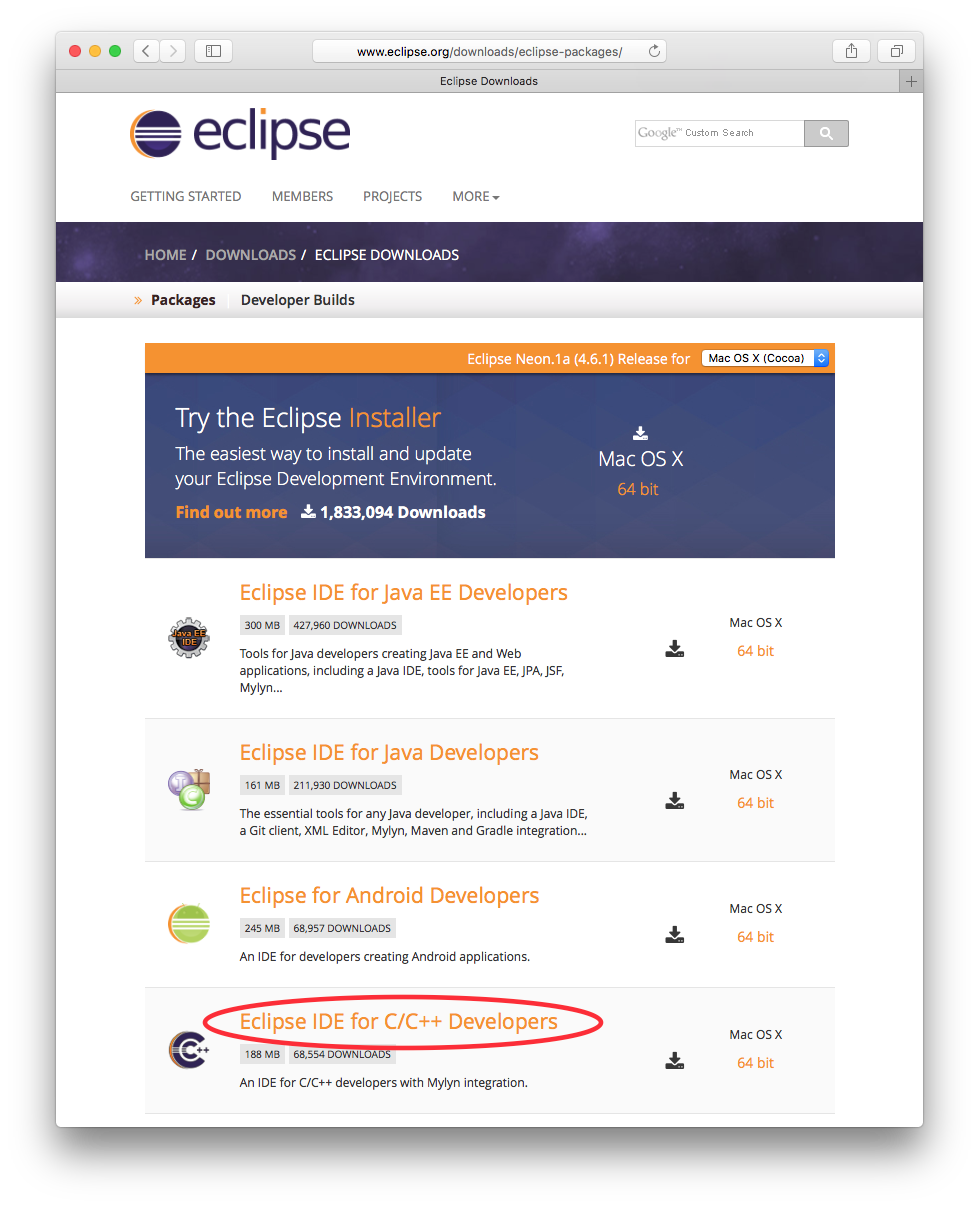 In case you reached the main Eclipse downloads page, avoid the recommended download and follow the link to the Eclipse packages. 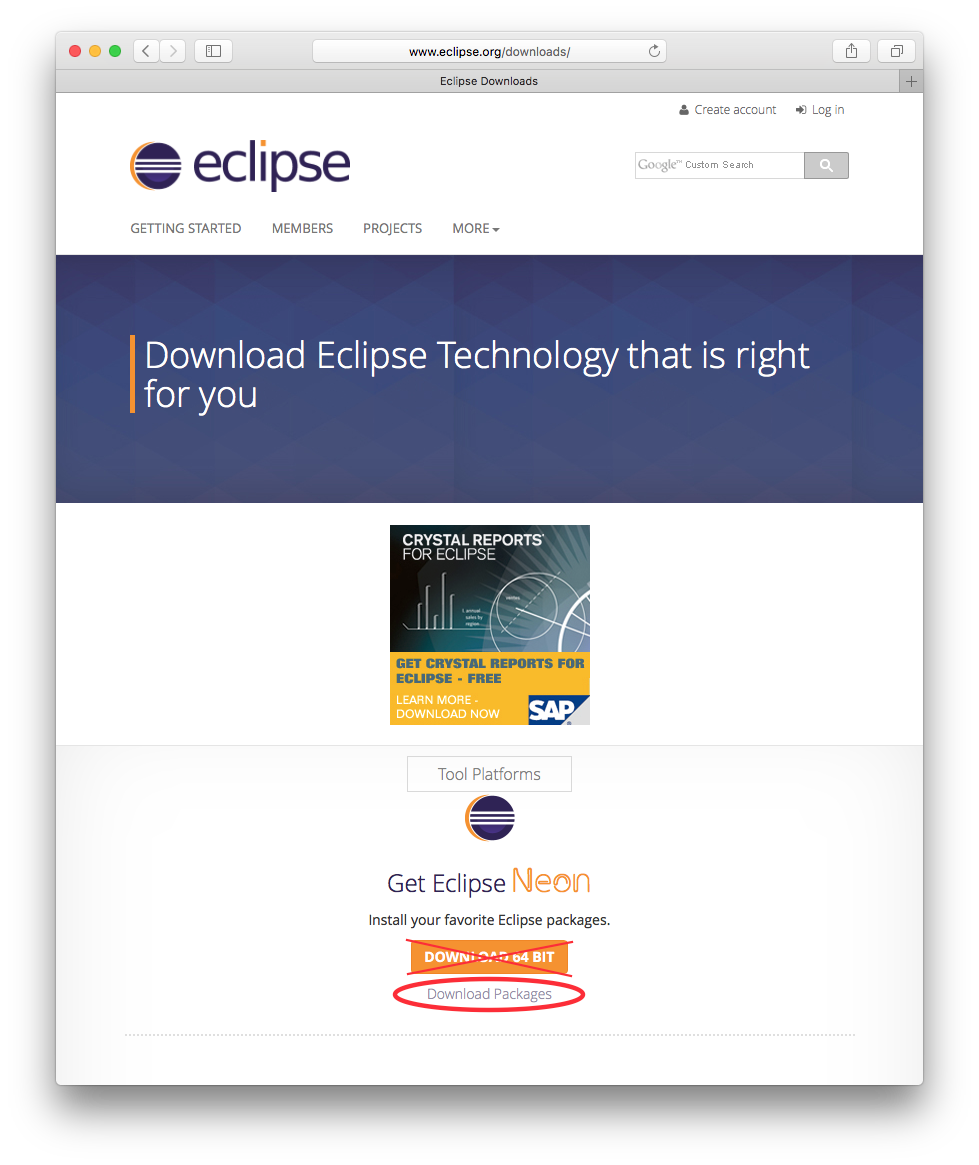 Traditionally Eclipse does not need an installer, Eclipse is distributed as a plain archive. To install Eclipse, simply unpack the archive at a place of your choice and start using it.

Note 1: on GNU/Linux be sure you manually install the Eclipse; DO NOT try to install it via the Synaptics package manager, or similar, since usually you get an older version and the CDT plug-ins are not included.

Note 2: Contrary to other tools, Eclipse does not need administrative rights, does need not be installed in a system location, and does not need not be a single instance on a system. Actually you are encouraged to install multiple instances of Eclipse, possibly one for each project type, to avoid mixing plug-ins from different sources in case different project types.

The minimum CDT version is 8.6. Do not try to use earlier versions, since either the install will fail (with something like … requires ‘bundle org.eclipse.cdt 8.6.0’ but it could not be found), or it will not run properly.

As mentioned before, the recommended way is to use a fresh Eclipse IDE for C/C++ Developers for the cross ARM development projects. Even if you did so, but especially if you did not do so, it is a good idea to check if you really have the latest version available. For this, enter the Eclipse menu and go to Help → Install New Software 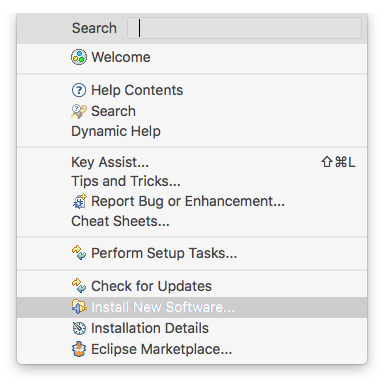 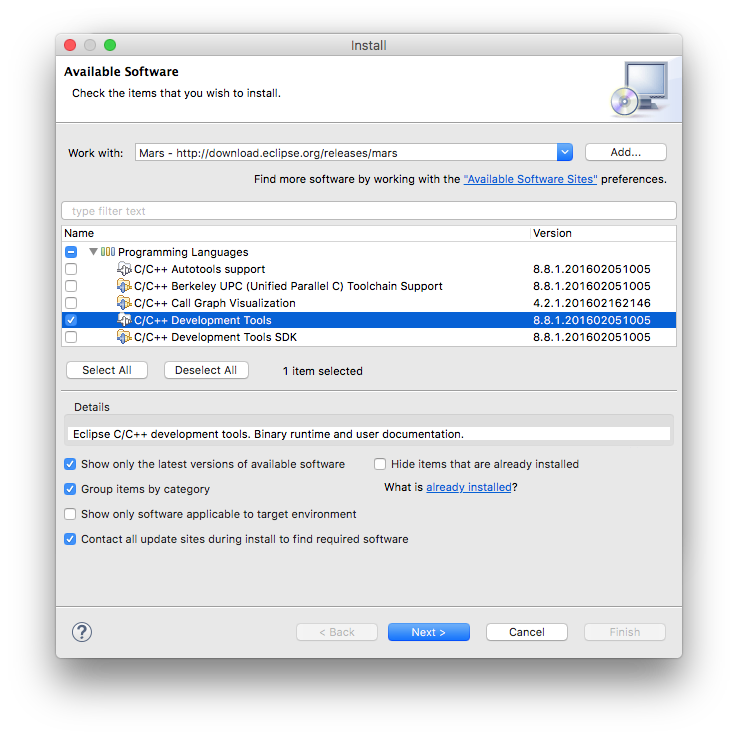 Please note that starting with 3.1.x, compatibility with Eclipses previous than 4.4 Luna was no longer possible. If, for any reason, you need a solution for Eclipse Kepler, you can try the GNU ARM Eclipse Plug-in version 2.12, but please keep in mind that this version is no longer maintained.

Similarly, starting with 1.1.x, compatibility with Eclipses previous than 4.3 Kepler was no longer possible. If, for any reasons, you need a solution for older Eclipse versions, you can try the GNU ARM Eclipse Plug-in version 0.5.5, but please keep in mind that this old version is no longer maintained.

The following samples are from a slightly older Eclipse 4.3 Kepler on macOS. Other platforms may behave slightly different, but the idea is the same.

Warning: Be sure your Eclipse is 4.4 Luna SR2 or later, otherwise the plug-ins will refuse to install, claiming Missing requirements and Cannot satisfy dependency.

This should make Eclipse automatically contact the Marketplace and present a window with all GNU ARM Eclipse features: 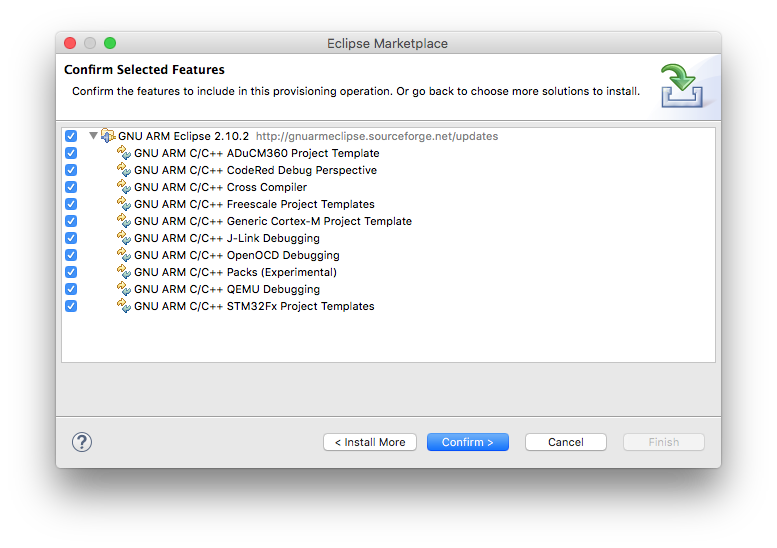 If, for any reason, this does not work, it is always possible to search the Eclipse Marketplace manually:

This should identify GNU ARM Eclipse and offer to Install/Update/Uninstall. 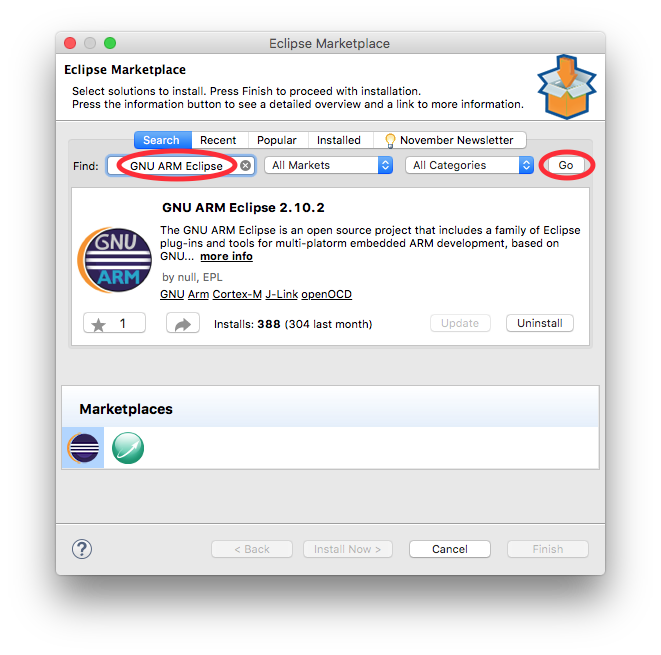 The classical way to install the GNU ARM Eclipse plug-ins is to use the Eclipse standard install/update mechanism: In the Eclipse menu → Help → Install New Software… 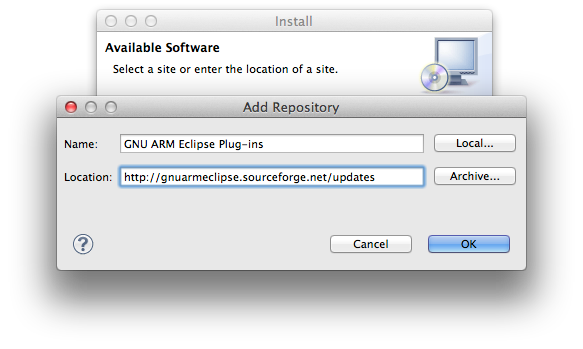 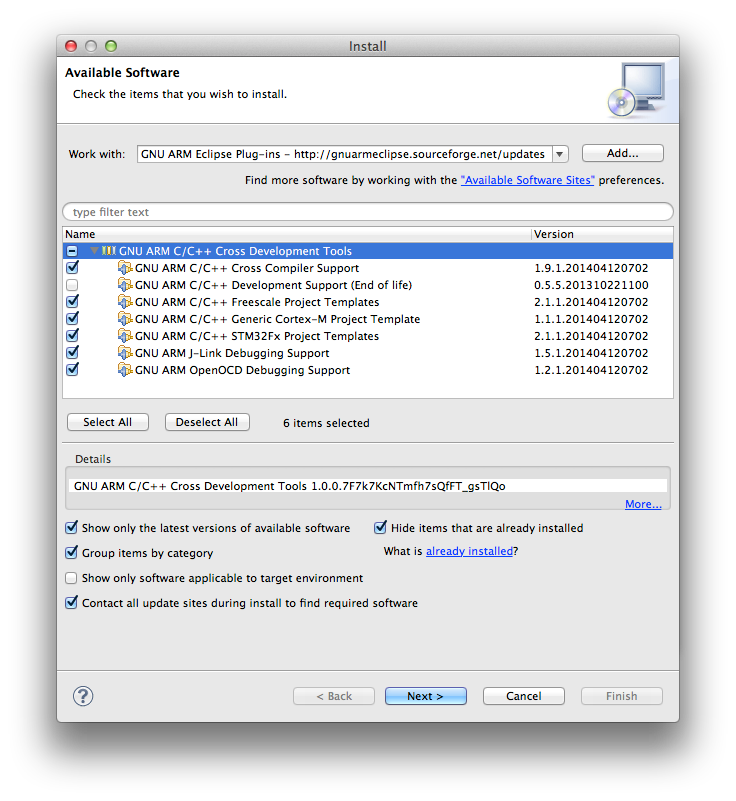 Once you define the update site URL, further updates are greatly simplified (Help → Check For Updates).

If, for any reason, you need to install a specific version of the plug-in, the solution is to download the archive from SourceForge Files and to point the Eclipse update mechanism to the local archive: In the* Eclipse* menu → Help → Install New Software…

If, for any reasons, you need to install the GNU ARM Eclipse plug-ins on a system without permanent Internet connection, and decide for the alternate way presented above, please be aware that the debug plug-ins require the presence of the C/C++ GDB Hardware Debugging plug-in. Usually this plug-in is not included in the standard package, but is present in the CDT Optional Features category, packed with the CDT archives available from the CDT download site. Download the desired archive, add it to your update sites, select the C/C++ GDB Hardware Debugging plug-in, restart as usual, and then install the GNU ARM Eclipse plug-ins from the local archive, as above. 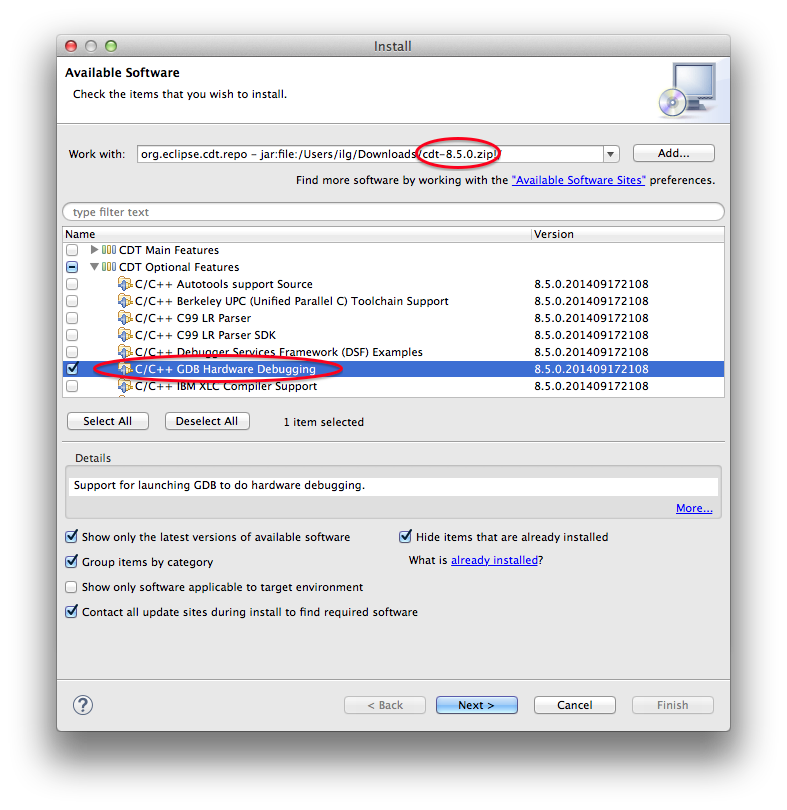 Note: Attempts to install the GNU ARM Eclipse plug-ins off-line without having the C/C++ GDB Hardware Debugging installed fails with an error related to installing the ilg.gnuarmeclipse.debug.gdbjtag.jlink.feature.group and other debugging features.

On-line install do not have this problem since the Eclipse automatically downloads the C/C++ GDB Hardware Debugging plug-in from the CDT update site.

If you already installed the toolchain (and, on Windows, the build tools) in the default locations, as suggested in the above steps, the plug-ins might have automatically discovered them.

The above definition will make the toolchain and build tools accessible to all projects in all workspaces.

If needed, you can define different paths per workspace (Workspace Tools Paths) or even per project (Tools Paths in the project properties).

To check if the paths definitions are effective, go to the project properties page and identify the PATH variable. Be sure the Origin column reads BUILD SYSTEM; if you manually edit it, the Origin will change and will read USER, but this is totally not recommended, since manually editing the path disables further automated updates of the path. 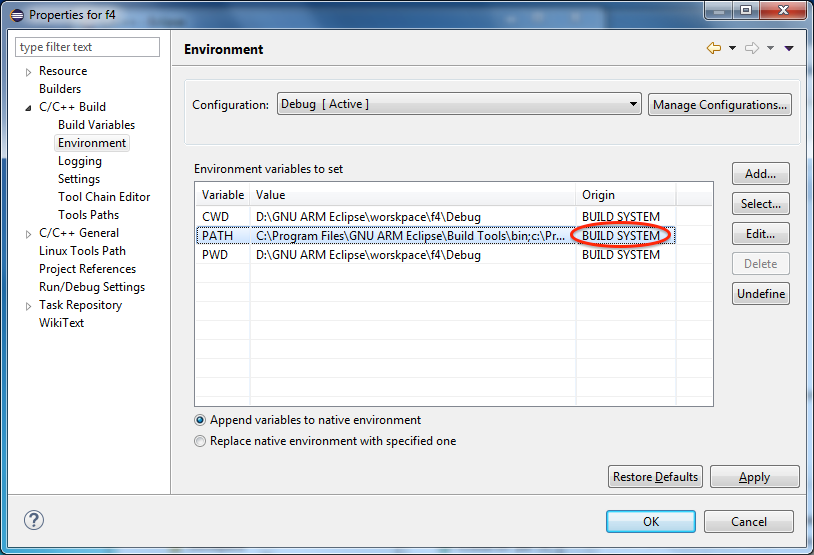 There are cases when the on-line access to the SourceForge mirror servers might not be reliable. In these cases the Eclipse update system may fail. For example: 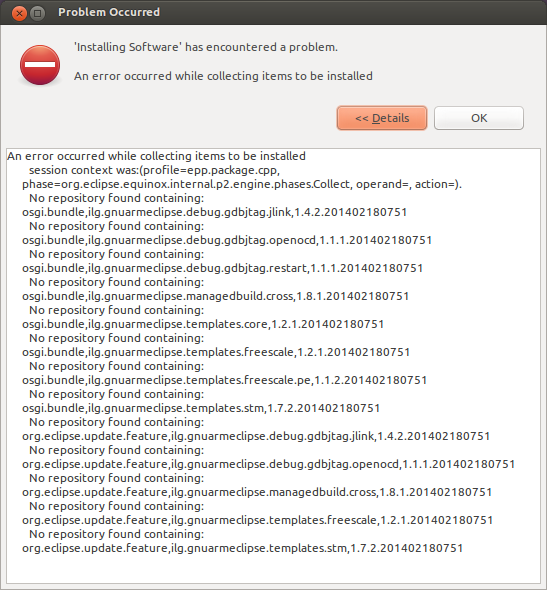 If this happens, Eclipse remains in a confused state and rarely can recover itself.

The workaround is to remove the GNU ARM Eclipse update site from the available sites, restart Eclipse and add it again. 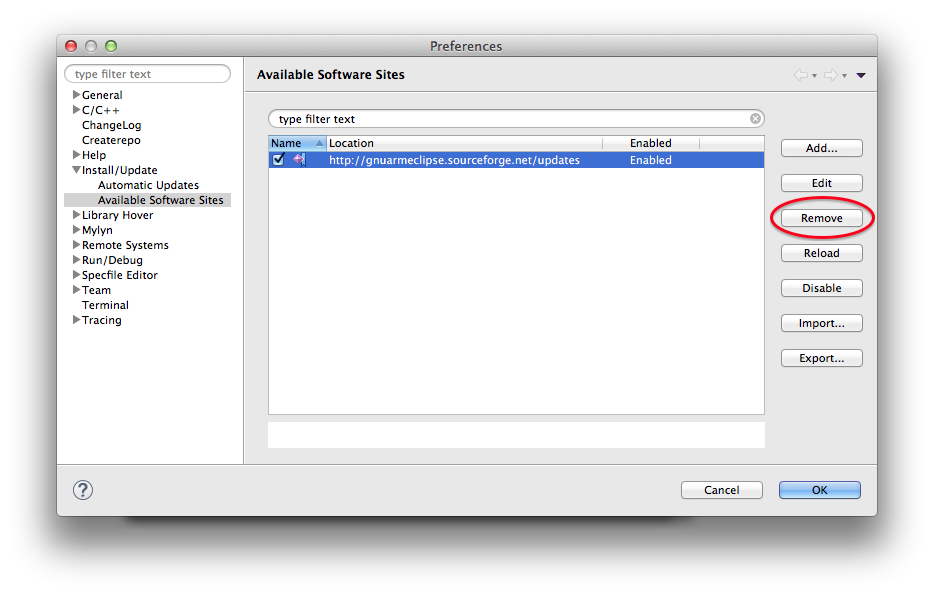 If this still fails, the alternative method is to manually download the latest version archive and to perform the install from it, as presented below.

If Eclipse complains that some required items could not be found, most probably you are trying to install the plug-ins on an older Eclipse, or on another Eclipse package than the recommended Eclipse IDE for C/C++ Developers.

Eclipse is incompatible with the GTK version 3 distributed with Ubuntu (confirmed even with Ubuntu 16LTS). To overcome this, disable the use of GTK 3, by adding the following line to your environment:

One of the confusing details of the GNU ARM Eclipse plug-ins versioning system is matching the version from the release announcement (for example Version 2.6.1-201502281154 released) with existing plug-ins/features.

The short answer is that the announced version refers to the update site, also packed as an archive, and available from SourceForge. The same version is also used for the ilg.gnuarmeclipse.core plug-in: 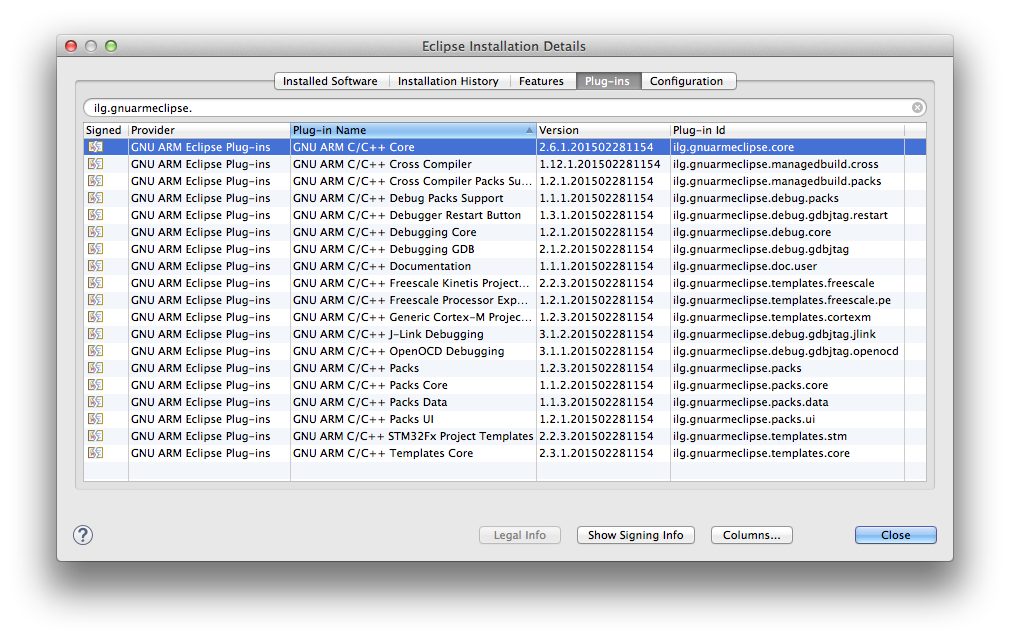 Although the core plug-in is referred by all features, this version number cannot be found in the list of the features: 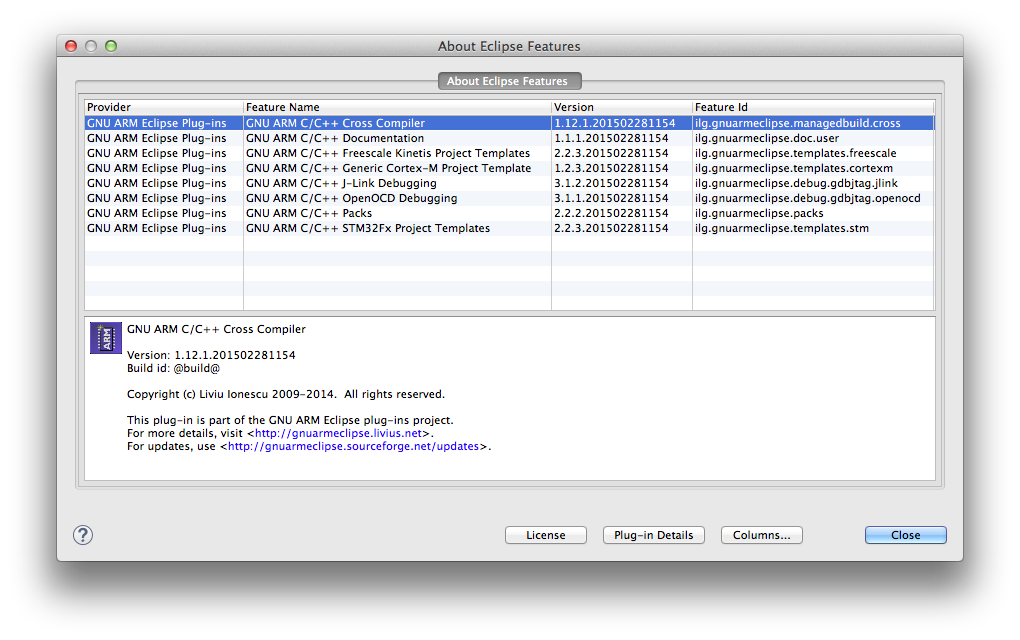 However, the common point for all these magic numbers is the release date, 201502281154 in this case, which is identical for all plug-ins and features.

Thus, the recommended method to identify plug-ins and features is by date, not by version, which differs from object to object.

After completing the installation of the plug-ins it is recommended to set the workspace preference.

Although support for CMSIS Packs is still experimental, the content of the packs can be used populate the Peripheral registers views during debug sessions, so it is recommended to install the packs for the processors in use.

For this follow the steps in the Packs manager page.

By completing the above steps, the Eclipse environment is ready, and you can start creating projects right away. However, for being able to build and debug these projects, you also need to install:

It is also highly recommended to install the Packs plug-in, to switch to the Packs perspective and using the Packs manager to install the packages related to the devices in use. Even if Packs support is not complete yet, you still can benefit from the existing CMSIS Packs, for example by using the peripherals registers view in debug, the documentation view in the C/C++ perspective, etc.

Follow the above steps and when everything is ready, proceed to create and build a test project.

If you encountered any problems when installing the plug-ins, pleas refer to the Support page and do not send private email.