If you already know the general facts about QEMU, you can directly skip to:

Adding emulator support to GNU ARM Eclipse took quite some time to materialise. By the end of 2014 the decision was made to use QEMU, the long-standing open-source multi-platform emulator. It is mature, it provides a good framework for emulation, it implements a GDB server, it provides support for semihosting, and although it does not intend to accurately simulate processor time behaviour, it does keep a quite accurate track of time when emulating timer interrupts, so it can also be used to emulate applications using RTOS-es.

QEMU is a great project, but its original focus was to emulate boards with large cores, usually application class, able to run Unix/Linux kernels. Support for bare metal Cortex-M based boards was available only for a very limited range of Cortex-M3 cores, so of little use in GNU ARM Eclipse.

Even more, support for semihosting in the public QEMU version was broken, and the verbosity required for integration with the QEMU plug-in was missing, so it could not be used with the GNU ARM Eclipse plug-ins.

The GNU ARM Eclipse QEMU is a fork of the public open-source QEMU project, customised for more support of Cortex-M cores, and a better integration with the GNU ARM QEMU Debugging plug-in.

The main benefits of using the GNU ARM Eclipse QEMU are:

The boards currently supported by the GNU ARM Eclipse QEMU are:

The following Cortex-M3 and Cortex-M4 microcontrollers are supported:

Work to support for the following boards is under way, but no release date is set:

The GNU ARM Eclipse QEMU maintains a certain degree of compatibility with the original qemu-system-arm, but it does not include the large ARM cores, being focused only on Cortex-M cores.

The main compatibility requirement for the emulator was to support all devices addressed during the standard CMSIS initialisations, which generally refer to PLL & clock settings.

The next requirement was to fully support the GPIOs, at the level of allowing one or more LEDs to blink.

The blinky projects generated by the GNU ARM Eclipse templates (and all STM32 HAL projects) use the SysTick to measure time, so any realistic emulation should support SysTick. GNU ARM Eclipse QEMU not only does this, but also provides relatively accurate time intervals, and the SysTick exception can be used from simple time measuring to driving a real-time scheduler with a reasonable number of task switches per second (1000 Hz is OK).

The official QEMU documentation is available in two manuals:

All provide a lot of information about QEMU, but do not go into much detail related to Cortex-M. 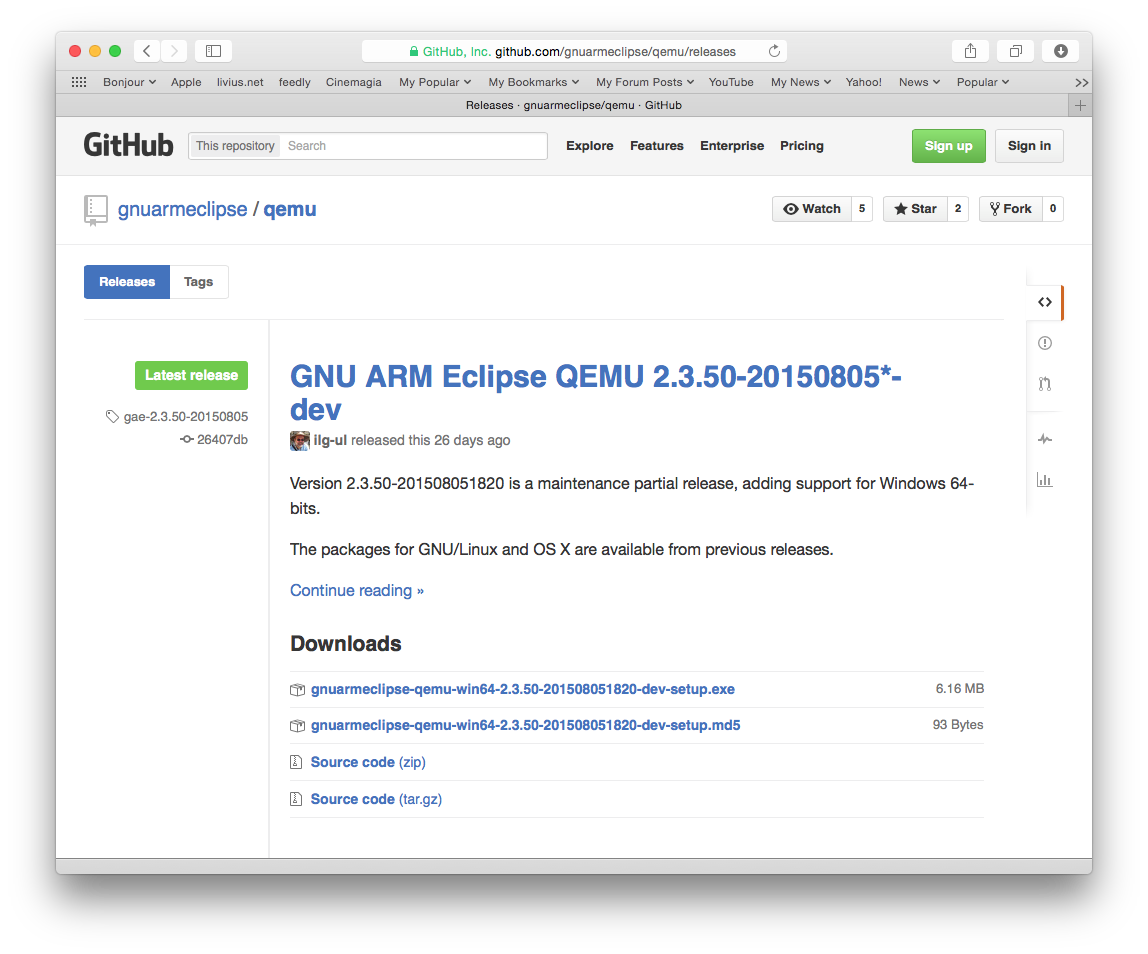 The details of installing the GNU ARM Eclipse QEMU on various platforms are presented in a dedicated Install page.

After the initial version proved that the idea to define peripheral register via tables is functional, it became obvious that these tables are not for humans to generate, but for machines. These definitions, in one way or another, are already available from the ARM SVD files (very large XMLs). So, for the use of QEMU, the next step is to process the SVD files and generate JSON files, with the peripheral registers, exactly as needed for a fast load by the emulator at startup. Then, from the JSON files, the run-time peripheral register objects can be generated.

There is currently no ETA for these changes, but if anyone is interested to support development, priorities might be changed.

For those interested on the procedure used to build these packages, please read the How to build page. However, the ultimate source for details are the build scripts themselves, all available from the build-scripts Git.