Version 2.3.50-201508012214 is the first production release of the GNU ARM Eclipse QEMU. It supports a range of STM boards, and fully implements the user LEDs available on these boards, presenting them graphically, in real time animation, over the board picture. 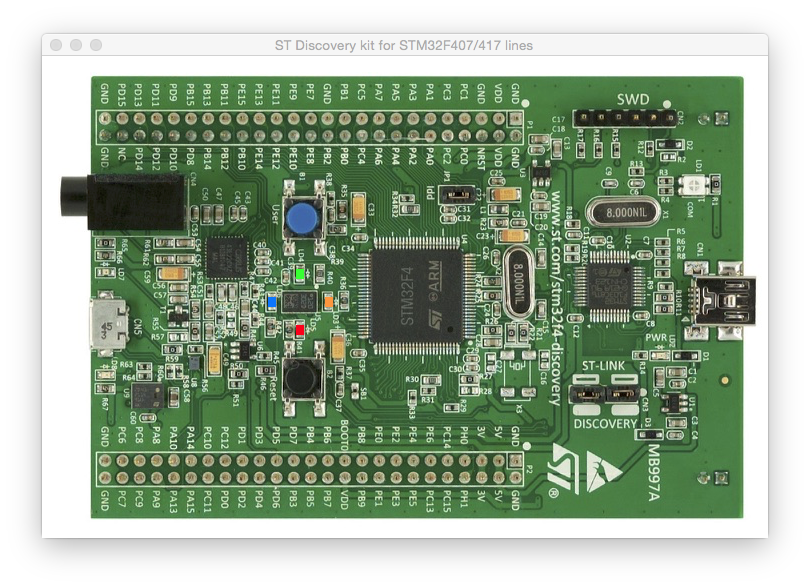 The following boards are fully supported in graphical mode:

Note: the rest of the boards listed in the previous QEMU release will be added in future versions.

The following Cortex-M3 and Cortex-M4 microcontrollers are supported:

The main compatibility requirement for the emulator was to support all devices addressed during the standard CMSIS initialisations, which generally refer to PLL & clock settings.

The next requirement was to fully support the GPIOs, at the level of allowing one or more LEDs to blink.

The blinky projects generated by the GNU ARM Eclipse templates (and all STM32 HAL projects) use the SysTick to measure time, so any realistic emulation should support SysTick. GNU ARM Eclipse QEMU not only does this, but also provides relatively accurate time intervals, and the SysTick exception can be used from simple time measuring to driving a real-time scheduler with a reasonable number of task switches per second (1000 Hz is OK).

A problem affecting QEMU graphical features was discovered: on all platforms rendering during Run sessions seems ok, but the window does not react to any events; fixed in release 2.3.50-201508041609-dev.

The new QEMU can be downloaded from the GitHub Releases page.

The MD5 sums of the files are:

The 64-bits Windows package was added as a new GitHub Release.